In the next group theory threads we are going to study the relationship between Special Relativity, electromagnetic fields and the complex group

There is a close interdependence of the following three concepts:

can be in fact combined into a complex six dimensional (6D) vector, sometimes called SIXTOR or Riemann-Silberstein vector:

and where the numerical prefactor is conventional ( you can give up for almost every practical purposes).

and where we have used natural units

B) Comparing both sides in A), we easily get

We can take the divergence of the time derivative of the sixtor:

with the aid of the 3D Levi-Civita tensor

, the completely antisymmetric tensor with 3 indices such that

we can write these matrices as follows:

We can define matrices

. Experts in Clifford/geometric algebras will note that these matrices are in fact “Dirac matrices”

In fact, you can admire the remarkable similarity between the sixtor equation AND the Dirac equation as follows:

In summary: the sixtor equation is a Dirac-like equation (but of course the electromagnetic field is not a fermion!).

and the 4 components of a “density-like” quantity

Then, we can recover the classical result that says that the energy density and the Poynting vector of the electromagnetic field is

photon, because you can observe that in the former case you HAVE:

in the latter (the electromagnetic field has not mass term!). In fact, you also have that for a Dirac field the current is defined to be:

and it transforms like a VECTOR field under Lorentz transformations, while the previous current

are the components of some stress-energy-momentum

Remark: Belinfante coined the term “undor” when dealing with fields transforming according to some specific representations of the Lorentz group.

The Maxwell’s equations and the electromagnetism phenomena are one of the highest achievements and discoveries of the human kind. Thanks to it, we had radio waves, microwaves, electricity, the telephone, the telegraph, TV, electronics, computers, cell-phones, and internet. Electromagnetic waves are everywhere and everytime (as far as we know, with the permission of the dark matter and dark energy problems of Cosmology). Would you survive without electricity today?

, or the so-called Kähler-Dirac-Clifford formalism in an analogue way.

Before entering into the details of electromagnetic fields, let me give some easy notions of tensor calculus. If

transform under Lorentz transformations? Let me start with the tensor components in this way:

Note, we have used with caution:

1st. Einstein’s convention: sum over repeated subindices and superindices is understood, unless it is stated some exception.

2nd. Free indices can be labelled to the taste of the user segment.

We define a contravariant vector (or tensor (1,0) ) as some object transforming in the next way:

denotes the Jabobian matrix of the transformation.
In similar way, we can define a covariant vector ( or tensor (0,1) ) with the aid of the following equations

Contravariant tensors of second order ( tensors type (2,0)) are defined with the next equations:

Mixed tensors of second order (tensors type (1,1)) can be also made:

We can summarize these transformations rules in matrix notation making the transcript from the index notation easily:

Indeed, without taking care with subindices and superindices, and the issue of the inverse and transpose for transformation matrices, a general tensor type (r,s) is defined as follows:

Indeed, the cuadrivector K can be “guessed” from the phase invariant (

since the phase is a dot product):

is the four dimensional nabla vector defined by

1st. The light speed c. It is the ultimate limit in vacuum and SR to the propagation of electromagnetic signals. Therefore, it is sometimes called energy transfer velocity in vacuum or vacuum speed of light.

. It is defined as the velocity of the modulated signal in a plane wave, if

where k is the modulus of

. It measures how much fast the phase changes with the wavelength vector.

From the definition of cuadrivector wave length, we deduce:

Then, we can rewrite the distinguish three cases according to the sign of the invariant

. The separation is spacelike and we get

. The separation is lightlike or isotropic. We obtain

. The separation is timelike. We deduce that

. This situation is not contradictory with special relativity since phase oscillations can not transport information.

. It is defined like the velocity that a “wave packet” or “pulse” has in its propagation. Therefore,

where we used the Planck relationships for photons

4th. Particle velocity. It is defined in SR by the cuadrivector

5th. Observer relative velocity, V. It is the velocity (constant) at which two inertial observes move.

There is a nice relationship between the group velocity, the phase velocity and the energy transfer, the lightspeed in vacuum. To see it, look at the invariant:

Deriving this expression, we get

so we have the very important equation

Other important concept in electromagnetism is “light intensity”. Light intensity can be thought like the “flux of light”, and you can imagine it both in the wave or particle (photon corpuscles) theory in a similar fashion. Mathematically speaking:

. Under a Lorentz transformation, momenergy transforms

. Assign to the wave number vector

a direction in the S-frame:

In matrix notation, the whole change is written as: 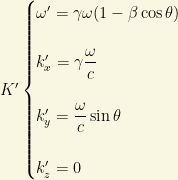 Using the first two equations, we get:

Using the first and the third equation, we obtain:

This formula is the so-called stellar aberration formula, and we will dedicate it a post in the future.

) instead of angular frequency,

where we wrote the frequency of the source as

and the frequency of the receiver as

. This last formula is called the relativistic Doppler shift.

. The cuadrivector electric current is something very similar:

is the electric current density, and

is the charge velocity. Moreover,

is the electric charge and

is the electric charge density number, i.e., the number of “elementary” charges in certain volume. Indeed, we can identify the components of such a cuadrivector:

. We can make some interesting observations. Suppose certain rest frame S where we have

, i.e., a frame with equilibred charges

, and suppose we move with the relative velocity of the electron (or negative charge) observer. Then

, while the other components are

. Then, the charge density current transforms as follows:

and using the metric, with the mainly plus convention, we get the covariant componets for the power-force tetravector:

And now, we realize that we can understand the electromagnetic force in terms of a tensor (1,1), i.e., a matrix, if we write:

where the components of the (1,1) tensor can be read:

We can lower the indices with the metric

(note that we can not study symmetries with indices covariant and contravariant),

. Focusing on the components of the electromagnetic tensor as a tensor type (1,1), we have seen that under Lorentz transformations its components change as

under a boost with

From this equation we deduce that:

Example: In the S-frame we have the fields

. The Coulomb force is

and the Lorentz force is

. How are these fields seen from the S’-frame? It is easy using the above transformations. We obtain that

Surprinsingly, or not, the S’-observer sees a boosted electric field (non null!), a boosted magnetic field,  a boosted non-null Coulomb force and a null Lorentz force!

The last equal in the last two equations is due to the orthogonality of the position vector to the velocity in 3d space due to the cross product. From these equations, we easily obtain:

and similarly with the magnetic field. The final tranformations we obtain are:

In the limit where

There are two invariants for electromagnetic fields:

It can be checked that

under Lorentz transformations. It is obvious since, up to a multiplicative constant,

and where we have defined the dual electromagnetic field as

or if we write it in components ( duality sends

We can guess some consequences for the electromagnetic invariants:

in every frame! This fact is important, since it shows that plane waves are orthogonal in any frame in SR. It is also the case of electromagnetic radiation.

can be in the non-orthogonal case either positive or negative. If

is positive, then it will be positive in any frame and similarly in the negative case. Morevoer, a transformation into a frame with

, then it is valid in every frame.

4th. If there is a electric field but there is no magnetic field B in S, a Lorentz transformation to a pure B’ in S’ is impossible and viceversa.

5th. If the electric field is such that

, then they can be turned in a pure electric or magnetic frame only if the electric field and the magnetic field are orthogonal.

6th. There is a trick to remember the two invariants. It is due to Riemann. We can build the hexadimensional vector( six-vector, or sixtor) and complex valued entity

We can introduce now a vector potencial tetravector:

This tetravector is also called gauge field. We can write the Maxwell tensor in terms of this field:

It can be easily probed that, up to a multiplicative constant in front of the electric current tetravector, the first set of Maxwell equations are:

The second set of Maxwell equations (sometimes called Bianchi identities) can be written as follows:

The Maxwell equations are invariant under the gauge transformations in spacetime:

where the potential tetravector and the function

are arbitrary functions of the spacetime.

Some elections of gauge are common in the solution of electromagnetic problems:

If we use the Lorentz gauge, and the Maxwell equations without sources, we deduce that the vector potential components satisfy the wave equation, i.e.,

Finally, let me point out an important thing about Maxwell equations. Specifically, about its invariance group. It is known that Maxwell equations are invariant under Lorentz transformations, and it was the guide Einstein used to extend galilean relativity to the case of electromagnetic fields, enlarging the mechanical concepts. But, the larger group leaving invariant the Maxwell equation’s invariant is not the Lorentz group but the conformal group. But it is another story unrelated to this post.