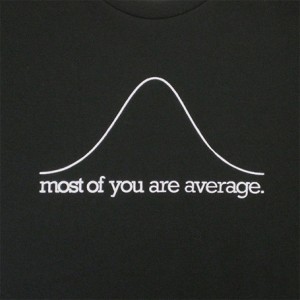 I am going to speak a little bit about Statistics. The topic today are “averages”. Suppose you have a set of “measurements”

. Then you can define the following quantities:

Remark: In the harmonic mean we need that every measurement is not null, i.e.,

There are some other interesting “averages”/”means”:

are the weight functions and they satisfy

Finally, a “naive” and usually bad statistical measure for a sample or data set is the midrange. Really, it is a mere measure of central tendency and no much more:

Many of the above “averages” have their own relative importance in the theory of Statistics. But that will be the topic of a future blog post handling statistics and its applications.

What average do you like the most? Are you “on the average”? Are you “normal”? 😉 Of course, you can consult your students, friends or family if they prefer some particular mean/average over any other in their grades/cash sharing, or alike :). See you soon in other blog post!

This interesting paper reviews the last bounds about Beyond Stantard Model particles (both, fermions and bosons) for a large class of models until the end of this year, 2012. Particle hunters, some theoretical physicists are! The fundamental conclusions of this paper are encoded in a really beautiful table:

. They are excluded below 1-2 TeV, depending on the channel/decay mode.

. They are excluded with softer lower bounds.

vector-like quarks are also excluded with

are also excluded below 0.6 TeV.

We continue desperately searching for deviations to the Standard Model (SM). SUSY, 4th family, heavy likely right-handed neutrinos, tecnifermions, tecniquarks, new gauge bosons, Kalula-Klein resonances (KK particles), and much more are not appearing yet, but we are seeking deeply insight the core of the matter and the deepest structure of the quantum vacuum. We know we have to find “something” beyond the Higgs boson/particle, but what and where is not clear for any of us.

Probably, we wish, some further study of the total data in the next months will clarify the whole landscape, but these data are “bad news” and “good news” for many reasons. They are bad, since they point out to no new physics beyond the Higgs up to 1 TeV (more or less). They are good since we are collecting many data and hopefully, we will complement the collider data with cosmological searches next year, and then, some path relative to the Standard Model extension and the upcoming quantum theory of gravity should be enlightened, or at least, some critical models and theories will be ruled out! Of course, I am being globally pesimist but some experimental hint beyond the Higgs (beyond collider physics) is necessary in order to approach the true theory of this Universe.

And if it is not low energy SUSY (it could if one superparticle is found, but we have not found any superparticle yet), what stabilizes the Higgs potential and provides a

Higgs mass, i.e, what does that “job”/role? What is forbidding the Higgs mass to receive Planck mass quantum corrections? For me, as a theoretical physicist, this question is mandatory! If SUSY fails to be the answer, we really need some good theoretical explanation for the “light” mass the Higgs boson seems to have!